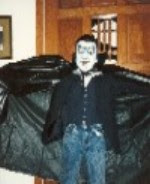 Yes, I'm two days late. Sorry. My back has been giving me fits again (see "Where In the World Was Lynn?"). It just would not put up with long stretches at the computer so I gave it a break.

The photo is our oldest son Chris decked out as a vampire on Halloween. Our grandson Zach will be thirteen in February. I got a little teary-eyed when he told me he was too old to Trick or Treat this year.

Last year he was a character from the Scream movies (which I haven't seen), the one with the warped white mask. The costume had a fake blood bag that Zach squeezed and "blood" oozed out of the eyes. Cool, but gross, so maybe it's a good thing he's outgrown dressing up.

I love Halloween. As soon as the Trick or Treat candy appears in the stores I start stockpiling. Michael and I carve the pumpkin the day before so it's ready to go. I plan Halloween around Trick or Treat, figure what time I need to have dinner over and done with so I can be on duty at the front door to dole out the goodies.

That's my favorite part of Halloween, the Trick or Treaters. I love the little ones, five and under. They're just adorable. When Zach was four he wanted to be a yellow M&M. Not red, not blue -- yellow. I ended up driving to Overland Park, Kansas to buy him a yellow M&M costume. It was worth it. He was hilarious.

Once upon a time we had scads of Trick or Treaters in our neighborhood. But alas, like Zach, the kids grew up and stopped Trick or Treating. Last year we had maybe three kids. I was so disappointed, and so bummed about this year -- until our youngest son Paul and his fiancee Sarah moved into a house in a neighborhood with billions of kids. A neighbor two blocks away warned them to expect 250 Trick or Treaters. I swooned when I heard that, and jumped for joy when Paul and Sarah invited Michael I over to share in the fun.

The weather was perfect Monday night, in the 50s. Porch lights were on up and down Paul and Sarah's block, strings of orange lights twinkled on eaves, jack o'lanterns flickered on doorsteps. Tons of leaves littered the lawns, ready to crunch under little feet.

By 7 PM we had 4 humongous bowls of candy strategically placed by the door. Michael and Paul settled on the couch to watch the Kansas City Chiefs on Monday Night Football (the Chiefs won), while Sarah and I hovered like wraiths at the window -- Sarah loves Halloween as much as I do -- hearts pounding in anticipation of the soon-to-descend horde.

The first wave brought Captain America and Iron Man, an adorable bumble bee and a princess in a pink gown and sparkling tiara. By 7:30 we'd seen three more Captain America, a couple more Iron Man, a fairy, a butterfly, and a handful of witches and ghouls.

Pretty good for the first half hour, we thought. We were pumped, but by 8:00 the steady flow had slowed to a trickle. By 8:30 the sidewalks were empty of kids and porch lights were going out. Sarah and I moved outside onto the front porch swing with a bowl of candy -- maybe the kids would smell it and come -- but it didn't help. The promised 250 turned out to be 40, tops.

At 9:00 we gave up and went inside. Sarah checked the Facebook page of the neighbors two blocks away who'd promised billions of kids. They ran out of candy at 200 Trick or Treaters and turned off the porch light.

Sarah and I concluded that she and Paul live on the wrong end of the neighborhood. For next year we're thinking about setting up a candy stand on the corner -- two blocks away where all the action is.

And how was your Halloween?
Posted by Lynn Michaels at 9:44 PM

Email ThisBlogThis!Share to TwitterShare to FacebookShare to Pinterest
Labels: Halloween, Trick or Treat

I love Halloween, too:) My favorite this year was a "Tutu Princess". Her sister decorated her hat and she was just adorable! Alas I only had a couple of more trick or treaters than last year and have way too much candy left over.

Thank goodness a couple of Snickers fell to the bottom of the bowl:)

Lucky you with the Snickers, Paris! I pocketed a few Milky Way bars. :) Sarah plans to unload the rest of the candy on her coworkers. I'm sure they'll love it.