The Story Behind the Story -- Aftershock

This is the sequel to The Patriot, which was part of the Rebels & Rogues 12-month mini-series from Temptation. Aftershock was part of Passion's Quest. This series was only 4 books, one for each of the four elements. The tagline for the series was "Earth, Wind, Fire and Water...the four elements -- but nothing is more elemental than passion."

Earth is the element I chose to write about in Aftershock, basically because the other three were already taken. Here's the blurb:

Rockie Wexler's father has created a device that predicts earthquakes. Unfortunately it can also cause them, and now both Dr. Wexler and the TAQ box have disappeared. Gutsy and brilliant Rockie knows she needs help to rescue her father from the bad guys. Help arrives in the form of Leslie Sheridan. The hard-edged, self-described pain in the butt turns her world upside down. And Sheridan has his own reasons for hating anyone with the name of Wexler.

The TAQ box, short for Tremor and Quake Warning Device, is a figment of my imagination. A couple nights ago I heard a snatch of a radio program about Nikola Tesla, the great 19th-century inventor. He was tinkering with a machine something like the TAQ box. According to the snippet I heard, when the cops and the fire department showed up outside his lab one night after he'd tested the device, he took a hammer to the machine and smashed it to bits.

I hadn't heard that story when I wrote the Prologue for Aftershock, so that was kind of freaky. So was the research I did on earthquakes. I started noticing rock formations and land features as I was out driving around and ended up scaring myself when I realized how many earthquakes had likely occurred around here over the eons.

Aftershock was one of the easiest books I've ever written. It pretty much wrote itself, and that worried me. Easy and effortless isn't a guarantee of good. I kept wondering if I'd screwed up someplace. I fretted that the book was awful, that readers would hate it, but when Aftershock came out I got a ton of letters from readers saying how much they'd loved it. Whew!

My artist friend Judy Johnson designed the cover for the ebook of Aftershock. I love Judy's cover because it depicts an actual scene from the book, one of Rockie's escapes from the bad guys. The primary bad guy is Conan from The Patriot. I had the best time bringing Conan back, and Maxwell, too.

Aftershock has one of the best last lines I think I've ever written in a book: "I love you, Bullwinkle." My other best last line is in Remembrance.

Aftershock is available for Kindle and Nook. And I'm glad to tell Nook readers that The Patriot is finally available in the Nook Store. Yay!

See this link for more on Nikola Tesla. A truly remarkable man.
Posted by Lynn Michaels at 10:57 AM No comments: 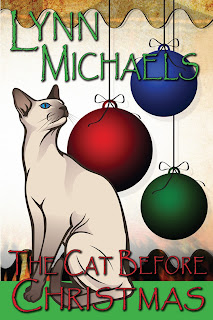 I just posted this on the front page of my website, www.lynnmichaels.us:

Can you believe it's July already? At this rate December 25th will be here before we know it! If you can see the Holiday Season peeping over the horizon, here's something to help put you in the mood -- an early Christmas present from me to you, The Cat Before Christmas for 99-cents on Kindle and Nook.

It's never too early to stir the embers of Christmas Spirit: kindness, love, and the joy of family and friends.

The Christmas in July sale runs through July 31st.

Do I hear jingle bells?

Why am I putting The Cat Before Christmas on sale? Two reasons. One, I love this story. I want everyone to read it and love it with me. Two, the economy sucks. I don't care what they say (or spin) in Washington, it sucks. Like you, I cringe when I pull up to the gas pump, I mutter about guns and masks as I push my cart through the grocery store.

We need a break, already! I can live without T-bone steak, but books -- never. So here's a sale to help ease the strain on your book budget. We're all in this together!
Posted by Lynn Michaels at 9:27 AM 1 comment:

The Story Behind the Story -- The Patriot 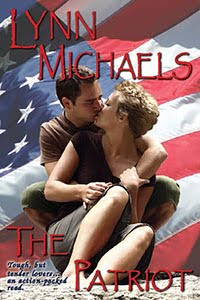 Since today is the Fourth of July it seemed the perfect time to tell you the story behind The Patriot. This is the last of the easiest-sales-I-ever-made.

The Patriot was part of the Rebels & Rogues mini-series from Temptation. The name Rebels & Rogues pretty much tells you what the editors wanted, a bad boy who was really a hero in disguise.

Here's the Reader Note I wrote for The Patriot:

Like the best emeralds, the most interesting heroes have flaws. It's their imperfections that make them alluring -- for the writer as well as the reader. These defects catch your eye and your breath, add depth and dimension to the story.

When I first envisioned The Patriot, I thought Nevin Maxwell was the hero. But when the phone rang at the beginning of chapter one, Ellison Quade answered. He talked and I listened. He told me about himself, about the Admiral and Max, but mostly he told me about Hallie. "Just get me on a plane for L.A.," he said. "I'll take care of the rest."

Which he did. Up to a point. The most important part of the story he left to Hallie. Making Quade lovable wasn't a problem -- what woman in her right mind wouldn't fall for a sexy gray-eyed Scorpio with hidden, unplumbed depths -- the challenge was making him believe he was lovable. Flaws and all. It took her a while, but Hallie convinced him, Admirably.

I really and truly thought Max was going to be the hero of The Patriot. Shows what I know. It's a rare gift when a character like Quade jumps off your fingertips, though Max is no slouch. I still receive emails and letters from readers asking if I'm ever going to write a book about Max and a book about Conan. I will, if I can come up with an idea worthy of them.

When I finished the first three chapters of The Patriot, I called my editor and read her a scene from Chapter Two. In the scene Hallie comes home from work, realizes that Quade has been in her house and rushes to check the security system. Here's the part I read to my editor over the phone:

The security system was on -- it had beeped when she'd let herself in -- but she raced to the walk-in closet in the living room to check it, anyway. It was still on. Damn smart cookie. Hallie doubled her fist on the wall beside the control panel and leaned her head against it. She was shaking.

"Tough guy, huh?" the smart cookie said from behind her.

"Tough girl." Hallie snapped her head around and saw him standing in the closet doorway. "It's hard to tell, I know, but take my word for it."

"Not that hard," he replied, leaning one shoulder against the door frame. "Your system isn't worth beans. Take my word for it."

He folded his arms and smiled at her with all the warmth of a glacier. "So am I."

When I finished reading, my editor said, "Hurry up and send me that book so I can buy it." I did and she bought it.

The Patriot is the last book I wrote on my first computer, an Epson QX-10 that cost me $2500 in 1985. Eppie worked on 2 floppy disk drives. The monitor and printer were extra, and not cheap, either, but Eppie sure beat a typewriter, even with her tiny, 8-inch monitor.

Eppie got me through 5 books. The sixth was The Patriot. One day I noticed that the air blowing out of her vents was really warm. The hard plastic case was hot to the touch. I knew that couldn't be good, but I didn't have time to take her in for repair -- the book was due in two weeks. I called my computer guy. He told me to keep Eppie cool, finish the book as fast as I could and bring her in.

I wrote the last 3 chapters in the middle of November with three box fans placed on the seats of three chairs ringed behind mine, and a small oscillating fan on the desk beside my keyboard -- all aimed at and blowing full tilt on Eppie.

I finished the book in ten days, mailed it to my editor and lugged Eppie into the shop. Her power supply was totally fried. My computer guy said I was damn lucky Eppie hadn't blown up or set the house on fire.

Inspiration can come from the strangest places. Did worrying that Eppie might burst into flames give me the idea to blow up Shark Island?

I don't know, but I still wonder.
Posted by Lynn Michaels at 11:30 AM No comments: