What Sells A Book?

It may surprise you, but no one knows. That may be the biggest secret in publishing. Well, not anymore because I just told you. Anyway, editors, publishers, executive editors, agents and the gurus in the marketing department don't have a clue what compels readers to buy a book.

Is it the cover? That's the starting point, an attractive, eye-catching cover will, editors and art directors hope, prompt readers to pick the book up in Barnes & Noble and Borders.

That's why once upon a time, hand selling was so important. At Waldenbooks (which is no more, alas) leading the customer to the section and placing the book in his or her hand was the #1 duty of every clerk. I know because I used to work at Waldenbooks. Best job I ever had -- I loved it! 'Course I spent most of my paycheck on books.

I told you in my "Favorite Books" post how awful the original covers were for The Patriot and Aftershock. To prove I'm not exaggerating I'm showing them to you above. As the old saying goes a picture is worth a thousand words.

In fairness to publishers, and Harlequin in particular with all their category lines, the art department has to crank out a lot of covers every month. That's a ton of work. Every cover can't be a masterpiece, and Harlequin did give me two splendid covers, for Second Sight and Nightwing.

I pulled the covers of The Patriot and Aftershock off the Internet so they're on the small side. If you look closely at the cover of The Patriot you'll see that my name is misspelled, Lynne Michaels instead of Lynn Michaels. This is the only book that Lynne with an e Michaels ever wrote. If readers sailed into Waldenbooks or Barnes & Noble in 1992 and asked if The Patriot by Lynn Michaels was in stock they were told no. The editorial department at Temptation felt so bad about the screw up that they sent me flowers.

When I received the cover flat for The Patriot I called my editor and said, "I'm pretty sure I never said in the book that Quade (the hero) has ears like jugs."

At the next RWA National Conference, Harlequin gifted me with a 24 x 18 poster of The Patriot mounted on foam board. They shouldn't have, really, but I schlepped it home and stood in on the floor against the bookcases in my office. Every time my husband Michael walked by he turned the poster face to the wall. He called it the Ugly Man cover.

Print published authors have no control over covers. We get what we get, and we're stuck with it. That's one thing I love about e-books. I get to create the cover.

It took me a while to figure out what the Harlequin art department was going for with the cover of Aftershock. Here's a sentence from the back cover blurb: "Rockie Wexler's father had created a device that would predict earthquakes. Unfortunately, it could also cause them, and now both Dr. Addison Wexler and the machine had disappeared."

I think all the rocks and cracks in the background are supposed to represent earthquake fissures. I think. What's your guess?
Posted by Lynn Michaels at 10:51 AM No comments:

Email ThisBlogThis!Share to TwitterShare to FacebookShare to Pinterest
Labels: What Sells A Book?

Wow! I Made Two Bestseller Lists! 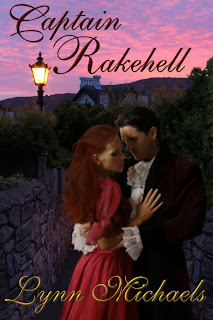 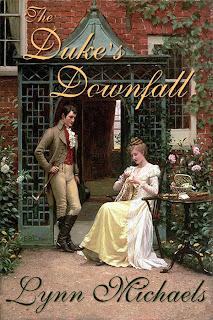 The Duke's Downfall is #3 on the Regency Romance List, #4 on the Regency Historical List. Captain Rakehell is #6 on both lists! Look fast -- these lists update several times a day.

Thank you, Kindle readers! With all my heart, thank you!

I'm amazed and excited. Amazed because I wrote these books 20 years ago. Excited because it means there's still a market for short Regency romances. New York publishers gave up on them years ago, because they thought the readership was too small. Obviously Kindle readers disagree.

In the early 90's when I wrote Captain Rakehell and and The Duke's Downfall, Fawcett, Signet, Avon and Kensington (if memory serves) all published 4 to 6 short Regencies every month. These short novels were less than 60,000 words. I call them category romances for the ton; that's a Regency term for the British aristocracy.

I love the Regency period, and I love Regency romances. I've read zillions of them. Everyone who loves Regencies loves Georgette Heyer. My second favorite Regency author is Marion Chesney. My favorite of all her books is Deirdre and Desire.

I wrote Captain Rakehell first about Lord Lesley Earnshaw. The Duke's Downfall is the sequel about Lesley's older brother, Charles, the Duke of Braxton. I'd planned to write a third book about Charles and Lesley's youngest brother, Teddy, and then New York decided to throw in the towel on Regency romances.

That was then, and this is now so sometime this year I'll write that third book about Teddy. The title is The Terror of the Ton, which describes Teddy perfectly. I can't wait to get started!

Thanks again, Kindle readers! You're the best!

And thanks to the very talented Pati Nagle for the great covers. 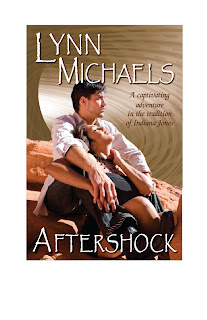 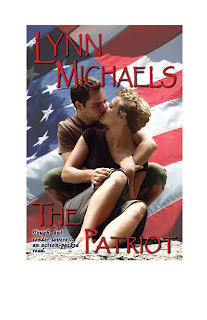 One of the toughest questions for an author to answer is "Of all the books you've written which one is your favorite?" I've been known to go totally blank when asked that, but I'll usually say, "All of them." I don't mean that to sound pat or off hand, it's simply the truth.

If you asked me "Which one of your books did you enjoy writing the most?" two that come instantly to mind are The Patriot and Aftershock. I had more fun writing those books than a person alone in a room with a computer should be allowed to have. I'm glad there are no laws against that.

The bad guy in both stories is a mercenary named Conan. That's not his real name -- no one knows his real name, not even Interpol -- that's just what he's called because he resembles Arnold Schwarzenegger, who was only a movie actor when I wrote the books. Conan makes his first appearance in The Patriot and returns in Aftershock.

Like the Terminator, another of Arnold's iconic characters, thanks to the boom in e-readers like Kindle and Nook, The Patriot and Aftershock are baa-aack -- and so in Conan -- this time as e-books.

Preserving books is the coolest thing about e-publishing. A book never goes out of print; there's no spine to crack and drop pages, and you can't lose it or leave it in the dentist's office.

For authors, especially category romance authors (The Patriot and Aftershock were first published by Harlequin Temptation) this is a huge thrill. Why? Because the average shelf life of a category romance is three weeks. A book that took me 6 to 9 months to write has a sales window of 21 days and then, pffft -- it's gone, outta there, pulled off the shelf to make room for the next month's titles. That's heartbreaking for authors, and frustrating for readers who really wanted the book but somehow missed it. I know because I've been one of those readers.

Bookstores don't return whole copies of mass market paperbacks. They strip the covers and return those to the publisher for credit. The rest of the book is tossed in a dumpster. It boggles the mind when you think how many trees died only to end up in a landfill.

And speaking of covers, whoever said you can't tell a book by its cover must have seen the original covers of The Patriot and Aftershock.

The Patriot had the worst cover ever, my editor even said so. Aftershock wasn't much better, but it was nominated for a RITA award, the Oscar of romance writing. Authors have no control over covers. We get what we get, and we all hold our breath waiting to see what the art department comes up with.

My good friend Judy Johnson, a very talented artist, created the e-book covers for The Patriot and Aftershock that I'm sharing with you here. I love them!

If you like suspense and adventure with your romance then The Patriot and Aftershock are your kind of books. I hope you'll enjoy them, but there's no rush. They'll be waiting for you on Amazon and Barnes and Noble, as they say in fairy tales forever and a day.

E-books are a win for authors and a win for readers. Hallelujah! Can I have an amen?
Posted by Lynn Michaels at 8:55 AM 2 comments: