In our family we don't pardon our Thanksgiving turkey, we eat him, but first we name him. This year's bird was Irwin. Our youngest son Paul named him.

I wanted to call him Happy Jack the Turkey, but Paul objected because "Happy Jack" is the title of a song by The Who. Anything having to do with music is sacred to Paul so the bird was dubbed Irwin.

My husband Michael, who started this turkey-naming thing, kept calling Irwin Owen, which is the name of one of Paul's three cats. Owen is a big fat yellow tabby, almost the size of Irwin who is -- er, was, nineteen and one half pounds.

That's what I'm thankful for this year.
Posted by Lynn Michaels at 3:06 PM No comments:

Run for the Roses 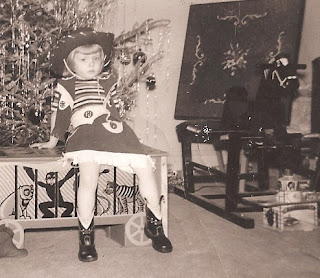 That's the title of my favorite Dan Fogelberg song. Thoroughbreds run races, and so do writers. Our finish line is the deadline we kill ourselves to meet. I've gone days without sleeping, skipped meals and skipped showers to meet deadlines. A writer's blanket of roses is a good review and fan letters from readers telling us how much they loved the book.

When I was a kid I desperately wanted two things, a piano and a horse. I got the piano, but I never got the horse. The closest I came was the rocking horse my dad made me for Christmas. I named him Blackie.

Hardly an inspired name, but I was only three. That's Blackie and me in the photo. Clearly I was exhausted from a breakneck gallop across the living room. I don't know what happened to Blackie (though I'll bet my three brothers do) but I can still remember riding him. His springs squeaked like crazy. I loved that horse.

I've always loved horses. When I'm in the car and "Run for the Roses" plays on the radio I get so choked up I can't sing along. I never miss the Kentucky Derby on TV. When Secretariat died I cried all day.

I've written 16 books, but only two about horses. The Dreaming Pool for Dell, originally published as Paula Christopher, which I'll tell you about later, and Second Sight for Harlequin Temptation.

I love Second Sight. It's one of my favorites. I wanted to call it Gift Horse, which has more to do with the story than Second Sight, but I was overruled. I considered changing the title when I put the book up on Kindle but decided that might mislead readers.

If you've seen the movie Secretariat -- and if you haven't, do, it's terrific -- you'll recall the scene where Diane Lane's character, Penny Chenery Tweedy, asks for a moment alone with Secretariat and gives him a pep talk. I'm sure there were people in the theater that wondered what the hell she was doing talking to a horse.

Some people say horses are psychic, others that they're intuitive. If you doubt me read Dick Francis' wonderful horse racing mysteries or ask people who've owned horses all their lives, like my cousin Dana Eichman.

"Their eyes tell you everything," Dana says.

Richard Parker-Harris, the hero of Second Sight, discovers that when he looks the filly High Brow in the eye. Interestingly, Dana made her comment to me before she saw the new cover Pati Nagle designed for the ebook.

It's a very cool cover that features High Brow and Susan Cade, the character in the book that can talk to horses. Susan is an equine vet with an uncanny knack for picking winners at the track. Richard is dead broke, and figures that Susan owes him one for breaking his nose with a riding crop when she was fourteen. That's where Richard and Susan start, but that's not where they finish.

You can see the cover on my website, www.lynnmichaels.us or in the Lynn Michaels Collection on Amazon. If you love horses and a good romance I hope you'll buy the book.

Blackie and I will both thank you.
Posted by Lynn Michaels at 7:19 PM No comments: