Spring Has Sprung -- Pass the Puffs 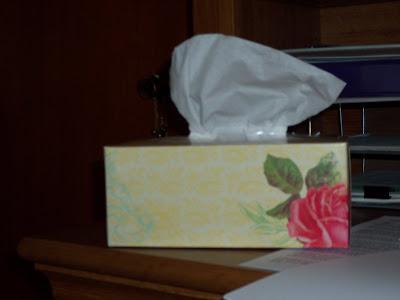 The grass is greening, the trees are budding, and I'm sneezing my head off. That's the box of Puffs that sits on my desk.

I still blame Kansas for this. See my post A Funny Thing Happened for why I blame the Sunflower State for my screwed up sinuses.

Last year spring came late, but it hit like a thunderbolt. Temperatures in the high 70's and astronomical pollen counts. I opened the windows and ended up with a yellow dining room table; that's how much pollen was in the air.

In August I gave up and went to see the ENT doctor who saved me after my disastrous run-in with Kansas.

He told me I have a deviated septum, a crooked sinus passage on the right side. That was part of the problem. He also suspected that I'd developed an allergy to something. He prescribed a sinus spray that finally gave me relief. When the first hard freeze killed everything outside my symptoms vanished, almost as quickly as flipping a light switch.

I could breathe and I was happy -- until mid-February of this year when the trees started to wake up and my symptoms returned. Stuffy nose and cough due to post-nasal drip. Remember the TV commercial with the big, sniffling red-tipped nose walking around on little stick legs? That was me.

I learned my lesson last year so I went straight to the ENT doctor. He put me on a 6-day course of steroids to calm the symptoms and suggested 10-mg. Zyrtec.

Knowing zip about allergy medications, I took myself to our neighborhood pharmacy. I bought a package of 10-mg. Zyrtec-D. The clerk had to scan my driver's license and I had to sign a statement on the electronic pad promising that I wouldn't abuse the product. I said to the clerk, "Like this is going to stop anybody who wants to make meth."

Anyway. The Zyrtec-D dried up my nose, my eyes, my skin, my throat and my mouth. I drank tons of water plus two 20-ounce bottles of Gatorade's low cal G-2 every day and still didn't have enough saliva to swallow. I tried Allergra next, but it upset my stomach.

This was not going well.

At the grocery store a couple days later I discovered 10-mg. over the counter Zyrtec, sans the decongestant, and bought that without fear of being arrested for running a meth lab in the basement. I took one before I went to bed that night and fell into a 13-hour coma.

When the fog lifted -- as John Denver used to say, "Take a trip and never leave the farm" -- I examined the tablets and saw that they're scored, which means it's okay to cut them in half.

I gave myself a head slap and cut the tabs in two. That's a 5-mg. dose instead of 10. I take half at night, the other half after lunch, and now I can stay awake to write. Yes, I'm writing a new book. Two, actually. I'll tell you about them later. (That's what writers call foreshadowing.)

To my fellow allergy sufferers: If we pool our funds maybe we can buy a few shares of stock in Proctor & Gamble, the company that manufactures Puffs. I believe it's in our best interests to keep these folks in business.
Posted by Lynn Michaels at 9:18 AM No comments: