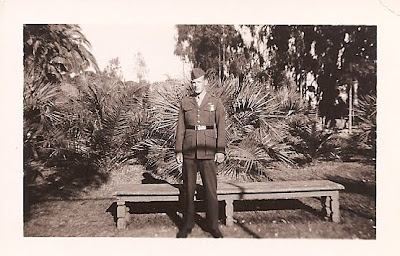 Semper Fidelis, or Semper Fi, is Latin for always faithful. It's the motto of the United States Marine Corps. Today is Veterans Day. Yesterday was the 236th anniversary of the Corps.

My dad served in the Marine Corps in World War II. He was a Staff Sergeant and a Drill Instructor. When I started dating in high school, Dad always met the boys at the door -- and he always found a way to mention that he'd been a Marine Corps DI. Not one of my dates ever tried any funny stuff with me.

My dad was a big guy, six-two and about two hundred pounds. His three brothers nicknamed him Herc, short for Hercules. That's my dad in uniform in the photo, taken in San Diego, California.

My parents had five children: my sister Ruthanne, my brother Malcolm, me, Jim and Mark. When we were kids we'd beg Dad to play Marine Corps with us. Here's how the game went: He'd line us up in formation and give us marching orders -- "Right face, har!" Left face, har!" "About face, har!" Within two minutes we'd be turning into each other and tripping over our own feet. Dad would laugh, throw up his hands and tell us we'd never make it as Marines.

Dad served in the South Pacific. He said he couldn't remember the names of the islands he was on. When we could get him to tell us war stories, which was like pulling teeth, they were always funny stories; the crazy way the Australian pilots landed their planes, shooting coconuts out of palm trees with a machine gun. My brother Mal found Dad's Purple Heart in his sock drawer. Dad told Mal he received it for tripping and falling into a foxhole.

Dad died on May 20, 2009. He was 93. Mal looked up his service record online, called me and said, "The names of the islands the old man claimed he couldn't remember are Guadalcanal and Bougainville." That gave us pause and made us wonder about the foxhole story. We could request the specifics of Dad's Purple Heart from the VA, but we haven't. We like the foxhole story just the way Dad told it.

My nephew Brent, my sister Ruthanne's oldest son, wrote and delivered Dad's eulogy. It's a wonderful tribute to my Dad. I'd like to share it with you:

Delmar Olaf Kauffman was born August 12, 1915 in Blue Island, Illinois, the fourth of six children born to Kendall and Agnes Kauffman. He had three older brothers and two younger sisters.

Del met Grace Mary Fletcher in Chicago, and they were married on May 2, 1941. Four months later, Grandpa answered the call of his country. Del was deathly afraid of water and could not swim, so naturally he joined the Marines. Later that year, on December 7, our country was at war. I am unclear exactly how they got Del over the Pacific Ocean, but they did, and he saw combat on Guadalcanal and Bougainville. He fought bravely for his country and received the Purple Heart. He then prepared other brave young men, those who would eventually win the war, as a drill instructor.

After the war, Grandpa worked hard to support his family. After relocating to Independence, Missouri he found his career as a milkman. He worked for Meyer Dairy from 1957 to 1973. In 1958, Grandpa was baptized into the Community of Christ Church. I understand there was a large crowd at Second Church that Easter Sunday...mostly to see if he would actually get into water above his knees.

Grandpa has been kindly described as strong-willed...some would say determined or even stubborn. He would say what was on his mind, and if you didn't like it, that was tough. That personality trait served him well and likely saved his life as he entered the next unexpected and very difficult phase of his life.

In 1976, three years after he'd retired following the death of his wife Grace, Del was mugged and shot in the head. His prognosis was not good. His children prepared themselves to lose their father as well.

After six months in a coma, Del willed himself to get well. With his determination, and with the help of the doctors and the rehabilitation staff at the Topeka, Kansas VA Medical Center, he began a remarkable recovery. He was determined to be independent again. Within five years he had gotten his driver's license back, bought a car, and regained enough strength and mobility to live independently.

The 33 years since the shooting were without question very difficult and trying for Del, but he watched his young grandchildren grow to adulthood and bear him 23 great-grandchildren. He was able to spend a year in England with his son Malcolm, a time he treasured. He watched his daughter Lynn become a successful author. He also buried his first child, my mother Ruthanne. He played cards, he socialized, he laughed, he cried...he lived. For 33 years after he was supposed to die, he lived. He touched the lives of each of us and many others because he lived. He willed himself to live.

I know Grandpa has been reunited with his beloved wife Grace, his daughter Ruthanne, and his brothers and sisters, all of whom passed on before him. I know he has been made whole. I know he is at peace and I am comforted.